“Words are the tools for the job of saying what you want to say.”  –Bergen Evans, Lexicographer

As our vocabulary expands it becomes easier to express ourselves—to articulate the detail of our thoughts, feelings, hopes, fears, likes, and dislikes. Just imagine not being able to express yourself in your writing or in your speech and that would make you feel. Frustrating right? Well that’s what drove Malcolm X to the dictionary. The place where he discovered the power of words.

The essay starts with Malcolm explaining his call to action in the community of Harlem, New York where he wrote his first set of letters to troubled locals about Allah, Islam, and Elijah Muhammad. When he didn’t receive a reply to any of these letters he wondered why and quickly realized that many in his community were too uneducated to read a letter let alone write a response back. Malcolm X also notes that his letters mostly addressed his view of that “the white man was the devil” and this could be a factor in why people chose not to write him back even when he was in prison.

Malcolm X lived two lives. One as an articulate hustler on the streets of New York who wrote in slang. But then he lived another life as he noticed that his simple English wasn’t really articulate or even functional for the audience of educated people he tried to write to. Like when he wrote to the Mayor of Boston, to the Governor of Massachusetts, and even to Harry S. Truman they probably never even saw his letters because they were handwritten pieces of functional language—misunderstood by those who were actually articulate and rhetorical correct.

“Many who today hear me somewhere in person, or on television, or those who read something I’ve said, will think I went to school far beyond eighth grade. This impression is due to my prison studies.” –Malcolm X

Malcolm X was an inmate at the Charlestown Prison, where he met a guy he refers to only as ‘Bimbi.’ Bimbi spoke intelligently, took charge of conversation he was in, and inspired Malcolm X to imitate these actions. He found himself reading through book after book and was soon unsatisfied with these motions. Malcolm X decided that the best thing to do was get hold of a dictionary in order to study and learn new words. When he did he would practice his penmanship and flip through pages of the dictionary. Malcolm didn’t even know so many words existed. He started with the first page copying all the words and their definitions, reading them aloud, and studying them again the next morning. He did this faithfully every day until he devoured the entire dictionary.

“I could for the first time pick up a book and read and now begin to understand what the book was saying. Anyone who has read a great deal can imagine the new world that opened.” –Malcolm X

Malcolm X spent months not even thinking about the fact that he was imprisoned. He escaped with Muhammad’s teachings, correspondence, visitors, and of course reading books. 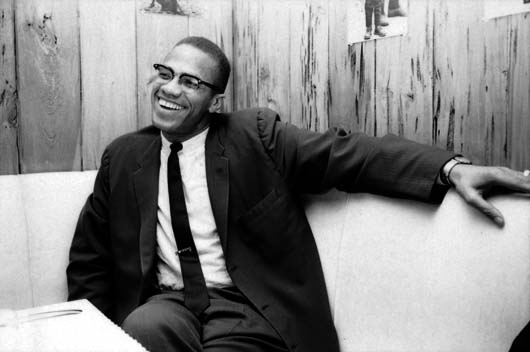 “I never had been so truly free in my life.” –Malcolm X