Hello again. I wanted to talk to you today about visual rhetoric and how it can be found just about anywhere in our daily lives.

Now, I talked briefly mentioned the term ‘visual rhetoric’ in my last blog when I talked about meme culture and how we use it today to conceptualize a narrative whether it be something digital or a real life situation to make our own references and jokes to share with people on the internet (most popularly on social media). However, I didn’t really tell you all what visual rhetoric exactly is. Well, here’s my interpretation:

Visual rhetoric is how we are persuaded by the things we see. From advertising to politics to the way you organize your bedroom or office space. It’s all visual rhetoric and says something about you.

What does that really mean? How does it work?

Okay, so basically whenever we see something we make a judgment about it. The judgment(s) we make are a result of our experiences, education, age, and exposure to life situations. Everything you have is designed visually. For example, the way you arrange your room says something about your personality because it’s based on your personal taste and preferences and people will notice that simply by looking.

How you design and layout your living space says a lot about your awareness to visual rhetoric, whether you realize it or not. The more you recognize which aspects of visual rhetoric are most appropriate in any given situation, the more advantageous you will be on a daily basis.

As you saw, I have a lot going on from day to day.

I start my morning in my dorm on campus. I usually stand in front of my dresser to turn my alarm off and put on my glasses. I have a stack of books on my dresser that I haven’t had a chance to read yet so I put them out to read in my free time (mind you since the school year started they’ve still remained untouched). I have my lotion, body mist, deodorant, tattoo healing cream (I have 3 but they’re in discreet places), vitamins (which I constantly forget to take), sunglasses, and a cup of tea (I was sick this past weekend but I’m feeling better: Yay).

Then I open the blinds by my desk and when I looked out the window I saw a red Mustang parked on a really funky angle. 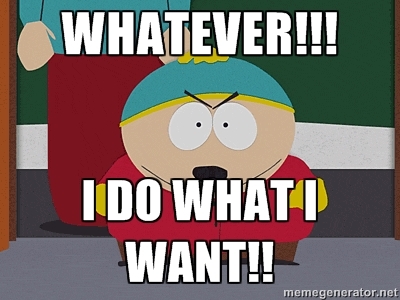 Next to start my day off I check my personal, student, and business emails. The photo you saw in the video was from my student email from UITS (University IT Services) saying that “Student @spsu.edu Email Accounts Will Become ‘Read-Only’ Sept. 11.” I absolutely had to take a picture of that for this assignment. I mean seriously? You made such a little change in policy a big deal to students from SPSU with the rhetorical message of “Hey you won’t be able to log in to your old spsu account anymore starting Sept. 11th, the same day that thousands of people died in the 9/11/01 plane crashes into the Twin Towers. Just thought you should know because, well, your school is officially nonexistent anyway.” I just sat there for a moment thinking to myself, Wow do they not have a communications chair or PR person? Who’s idea was this? I’m over the whole SPSU Lives on Forever phase but some people aren’t and I don’t know if they interpreted that email the way I did but I know there are some who did.

The rest of my day is fairly simple rhetoric:

Alright. That’s done and over with. The real point that I’m trying to make to you is the importance of visual rhetoric…

Well, as I already stated visual rhetoric is about arrangement, color, style, and personality.

Let’s say you apply for a job online or in the store and you have to submit a copy of your resume to the company, your resume: electronic or hard copy, is a representation of your visual rhetoric skills. Most employers won’t even spend more than 30 seconds to look at a resume. This is because they were not persuaded by the design element of the resume. You have to make yourself stand out (but not too much). Remember that.

Do you believe in fate or destiny? Well, everything in life does happen for a reason. I simply believe that everyone makes their own destiny by their actions and that if they don’t display the truth from the beginning that it will show itself through the actions they make every day of their lives. If someone doesn’t deserve a second chance they will “hang themselves” and destroy their chance for those opportune moments. It’s all just a matter of timing.

According to Ancient Rhetorics: Chapter Two, kairos is a term used to suggest an advantageous time or an “exact or critical time.” Kairos comes from a bas-relief in Turin, Italy which displays the importance of anticipating opportunities and seizing them before they pass by. Gorgia’s rhetorical theory accounts for the timely simulation of issues with an audience. Kairos draws attention to arguments that can be found in connection with particular issues in society, all the way to visual rhetoric used in memes on social media.

If you haven’t heard already then most would say you’re living under a rock but I’ll say that you just have better things to do then worry about celebrity drama… Anyway, Miley Cyrus vs. Nicki Minaj at the VMA’s?! I fell out laughing when I found out.

[If you have no idea who either of these women are: Miley Cyrus is the actress from Tennessee who played Hannah Montana on the Disney Channel show several years and Nicki Minaj is a female rapper from New York who is signed to Young Money Entertainment & Cash Money Records.]

Here is a short video of what happened between the two at the MTV Video Music Awards:

The streets have taken to social media via Twitter and Instagram feeds. There are so many memes representing the argument between the two that display the funniest visual rhetoric based on facial expression and conceptualization. 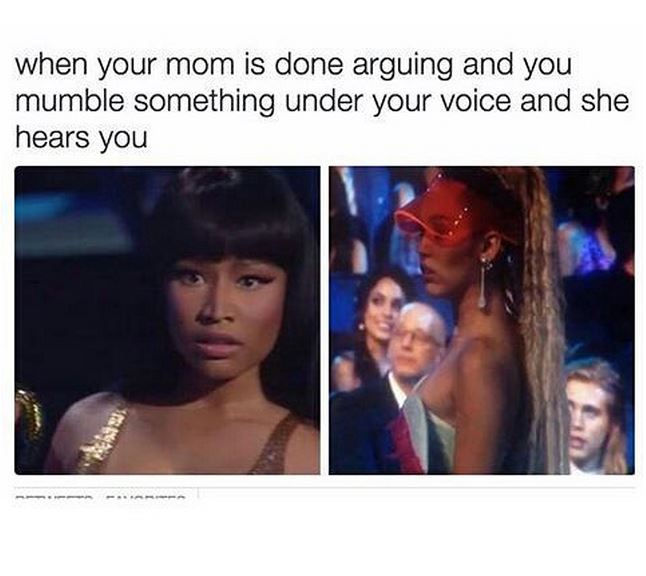 Most people have had a moment like this during their teenage years where their mom says something that they don’t agree with and they mumble under their breath but when she hears you like, “What did you say?” You just stare blankly like a deer in headlights and say, “Nothing. I didn’t say anything.” So the fearful face Miley has shows the same rhetoric of a child who is afraid of their mother. It is also funny because Nicki Minaj is actually older than Miley Cyrus so it presents a certain level of authority to make a joke. 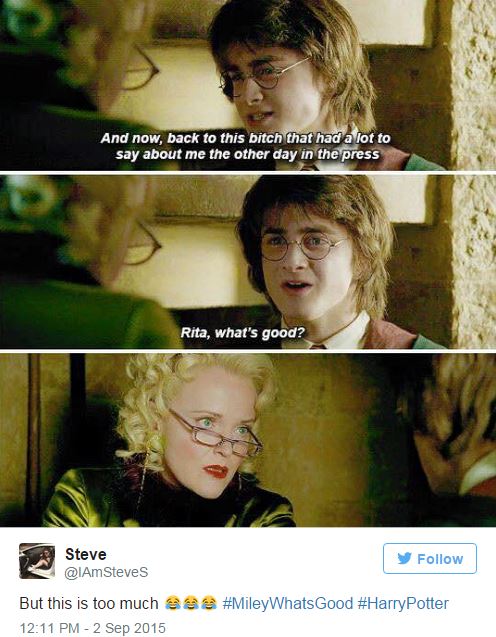 The concept for this meme comes from Harry Potter and the Goblet of Fire when Harry is the youngest wizard entered into the triwizard tournament and the woman Rita is a witch journalist for The Daily Prophet who makes false accusations about Harry Potter and is constantly reporting the wrong information about him. So related to the Miley vs Nicki situation the meme maker used Nicki’s words from the VMA’s to make a Harry Potter moment hilarious. 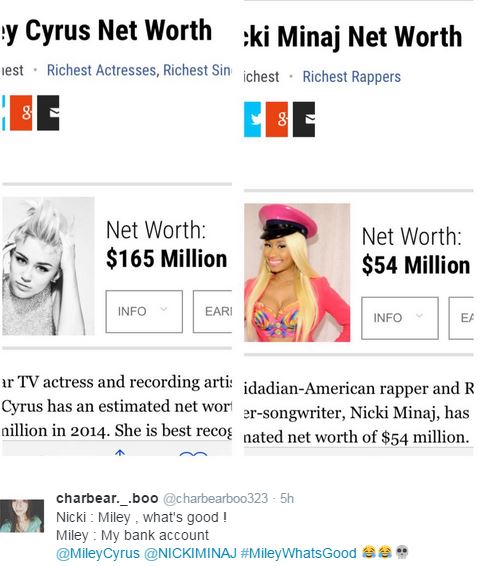 This meme maker on Twitter is displaying the reason that Miley didn’t respond foul towards Nicki’s comments because she has more money and that’s what’s good with her so she doesn’t care. 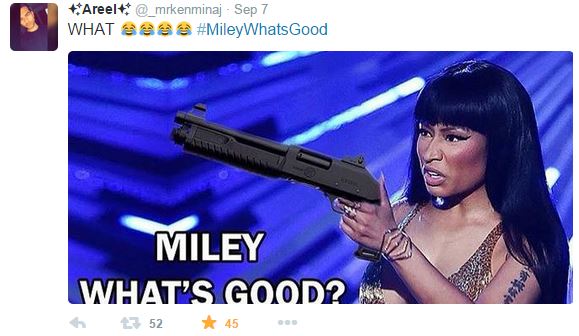 This last meme illustrates Nicki Minaj’s temper and unprofessional with the gun that has been Photoshopped into the image. This is similar to a gun prop that Nicki Minaj held almost a year ago in her video, Lookin A** N****, that caused a lot of controversy and displays how once again Nicki Minaj 1. causes drama with other celebrities in the industry and 2. displays controversy within her music videos.

Meme making has become it’s own category of rhetoric based on cultural and societal factors related to the social media. This situation between Nicki Minaj and Miley Cyrus has gotten a lot of attention in celebrity news reports like TMZ, MTV News, ABC News, Worldwide Media, HipHop Hollywood and many more. The real question on the table for discussion is if this brief argument on stage was real or fake. Entertainment Tonight, argues that because of Miley’s reaction with the timing after what Nicki Minaj said to her was too real and natural looking to have been fake.

We even have other celebrities who have gotten involved with the situation after press has come to them asking which side they would choose: Team Nicki or Team Miley? Team Nicki is surprisingly enough, Taylor Swift. According to Clevver News, Taylor Swift thinks that Nicki Minaj has a big heart and is often misunderstood, also that Nicki wasn’t bullying Miley. Team Miley on the other hand is someone who has been close to Nicki for years and is also a rapper for the Young Money Entertainment record label. According to Hollywood Life, Drake is Team Miley. He agrees with the way she handled the situation on stage with her response and that he might even do a diss track with Miley against Nicki. Nicki Minaj says that she feels completely betrayed by Drake. What a disaster.

I guess it’s all a matter of timing. Nicki Minaj is a Sagittarius (born Dec. 8th) and so are Miley Cyrus (born Nov. 23rd) and Taylor Swift (born Dec. 13th). First she went off on Taylor Swift about VMA nominations, then on Miley Cyrus at the VMA’s, but what people really want to know is who might be next? Which artist in the industry is going to be the next competition that Nicki is truly threatened by? Another Sagittarius in the industry? Another female? Or maybe it’s all just been a coincidence. We’ll find out soon enough though because third time’s a kairos.

Thank you again for reading my weekly blog post and feel free to leave a comment below about your opinion(s) on the whole situation.

Updates in the life of Nicki Minaj: