In 1886, German inventor Karl Benz built the Benz Patent-Motorwagen. The automotive industry in the United States began in the 1890’s and cars were not widely available until the early 20th century. As a result, the size of the domestic market and the industrialization of mass-production, the automotive industry of America quickly became the largest in the world.

One of the first cars that was accessible to the masses was the 1908 Model T, an American car manufactured by the Ford Motor Company. Before the Model T, cars were a luxury item considering that there were fewer than 200,000 on the road. Even though the Model T was fairly expensive for its time (about $825=$18,000 today), it was built for ordinary people to drive every day. Let’s check out an advertisement of this fine vehicle. 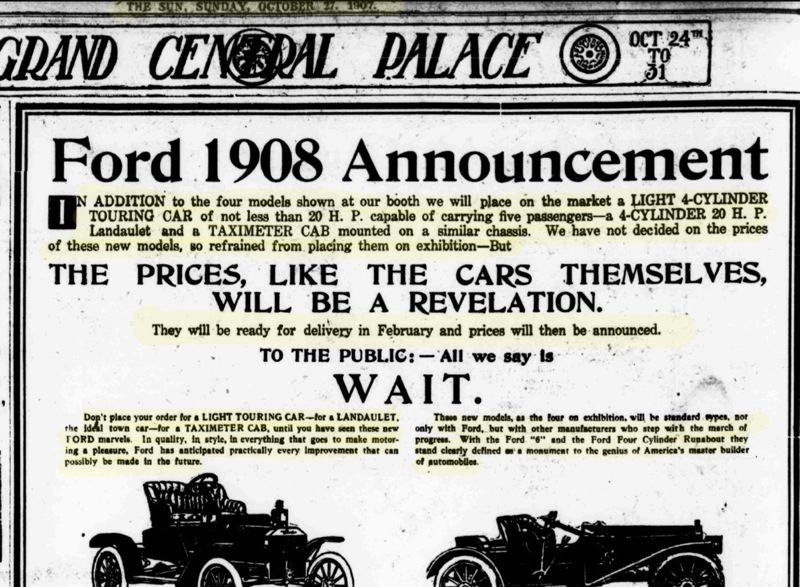 “In quality, in style, in everything that goes to make motoring a pleasure, Ford has anticipated practically every Improvement that can possibly be made In the future.”

This announcement talks about the features of the vehicle: 4 cylinder, 20 horse power, and seats 5 passengers. Ford kept prices low by sticking to building one model at a time in order to reduce waste, save cost (time & money) and make it easy for workers to assemble the cars. By 1914, the moving assembly line made it possible to produce thousands of cars every week.

In the 1920’s, many Americans wanted style that lasted, speed and luxury. As tastes changed, the era of the Model T came to an end and the last one rolled off the assembly line on May 26, 1927.

Chrysler Imperial series featured a custom-built body (named LeBaron or Briggs), a 145-inch-wheelbase chassis (underpart of a vehicle), a 125-horsepower engine and an estimated price tag of $3,145. So luxury was definitely an important factor in the production of this vehicle.

By the 1940’s we see advertisements for even more new technological advances (watch the video below).

You’ll take notice that the commercial is perfect for its time. Well at least I think so. This era of the automotive industry was focused on everything from price, color, quality, but mostly the features of technology of the way the car drove like how fast, how smooth, how systematic and practical (all characteristics of the male gender during this time).

This particular video above on fluid transmission has a brief narrative specific to gender roles of the 1940’s (after the Women’s Rights movement of the late 1800’s to the 1920’s) where a women is selling Chrysler’s new fluid transmission to say, more or less, “it’s so smooth, efficient, and easy your wife could do it.” Especially considering that right after her pitch a man’s voice is back on the commercial saying, “fluid drive can’t help but make everyone a better driver.” This is a great selling point for men who want to buy a car at the time but are afraid that their wife might mess it up. They feel comfortable to buy because Chrysler has established their trust and reliability to the consumers.

1960’s was a very emotion time for racial equality as the Civil Rights Movement was happening. I’m going to skip over this tender moment in history and go straight in the 1970’s. I’m not sure what to call this time period but I feel that the Free Spirited Love & Peace decade would be appropriate. People were becoming more concerned about the environment, travelling outdoors, and being groovy (more emotional than logical but still practical). Below are two advertisements that I think perfectly represent this time period.

In the first one we see a Volkswagen hippie van with the statement, “the zoo that runs on peanuts.” Basically suggesting that the motor oil is environmentally safe and that the petting zoo is travelling from place to place. The second one simply displays the features of a groovy but cool and sleek attitude with the leather interior, travel outdoors, sleek body, and it’s so diverse and custom built to perfection that anyone can drive it, man or woman.

After the Space Race competition between two Cold War rivals, the Soviet Union and the United States, we begin to see car advertisements in the 1990’s that relate to more competitiveness with other countries. Below is an advertisement from 1994.

This advertisement features an almost poetic repetition of the word “More” at the beginning of each line. What does it really mean though? Well looking back in time versus today, I think that this was the beginning of America’s bigger is better mentality and our competitive nature as proud capitalist that started at the turn of the 21st century.

In this time period between the start of the century and now, a lot has changed in 15 years. Originally people wanted hummers with huge rims and tv’s in the back of the headrest with surround sound speakers and even earphone plugs for the children in the backseats. Now we’ve become more aware of the environment and what we’ve been doing to pollute it and hurt our own resources. So now there are electric cars and even cars that have engines which run more fuel efficiently at 32-36 mpg.

But from this evolution of the automobile industry and the way global weather changes are happening, what makes us still want to buy cars? Why not just get rid of them all and walk, bike, or take public transportation?

What makes a car that’s so expensive now a days really worth it?

Well the thing is that we are seeing the most technological advances of the last century with touch screen navigation, Bluetooth speakers, push to start engines operated with smart keys, engines that run more efficiently on gas mileage, and even cars that park themselves. I mean seriously, technology is amazing! Check out the video below.

I think I’ve proved my point and I can’t wait to see what is next to come for this industry.

4 thoughts on “Evolution of the Automotive Industry”